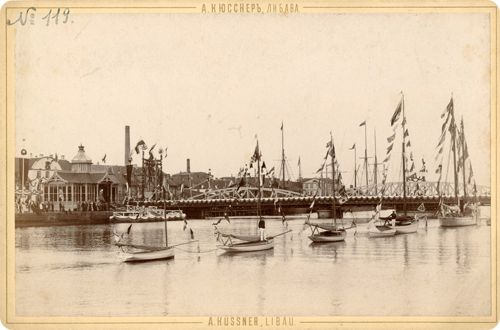 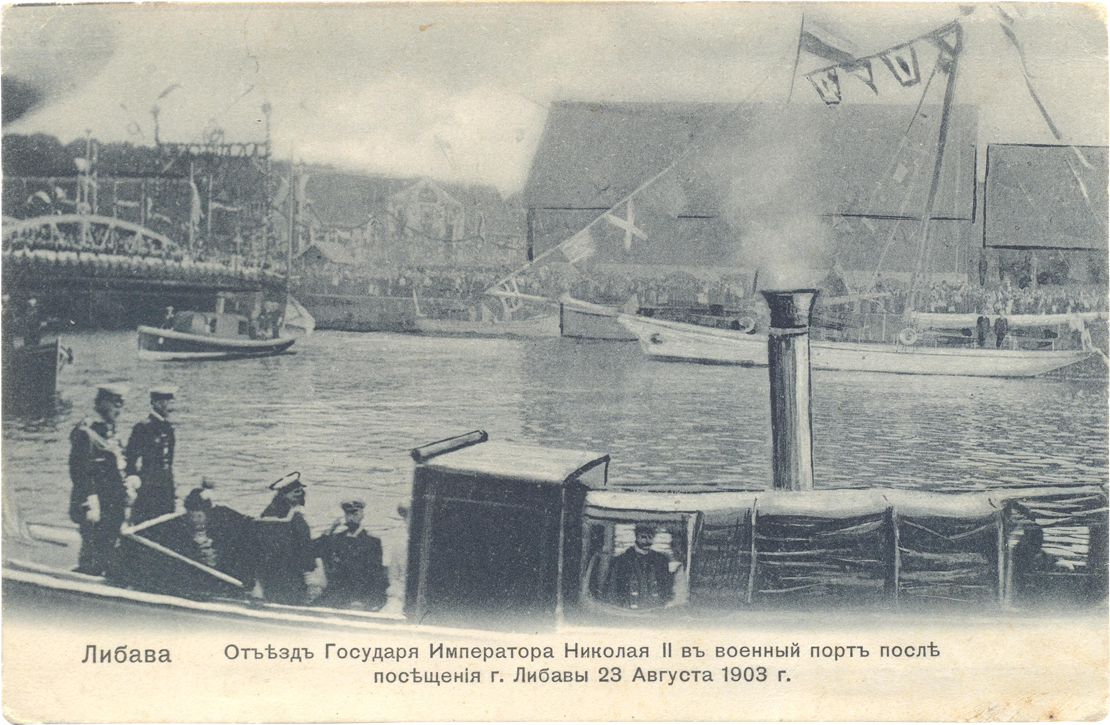 Yacht of the Russian Emperor Nicholas II a moment
before sailing to Karosta. Year 1903. Foto © Liepaja museum
Year 1907
Transportation of emigrants via a ferry line Liepaja – New York – Halifax was commenced by company Russian - East Asian Steamboat Society owned by a Dane Peter Bornhold. This company became very popular in a short period of time since company’s ships were comfortable and modern, and also crew’s salaries and working conditions were better than on competitors’ ships. 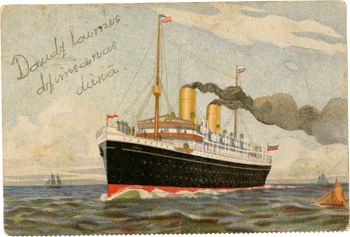 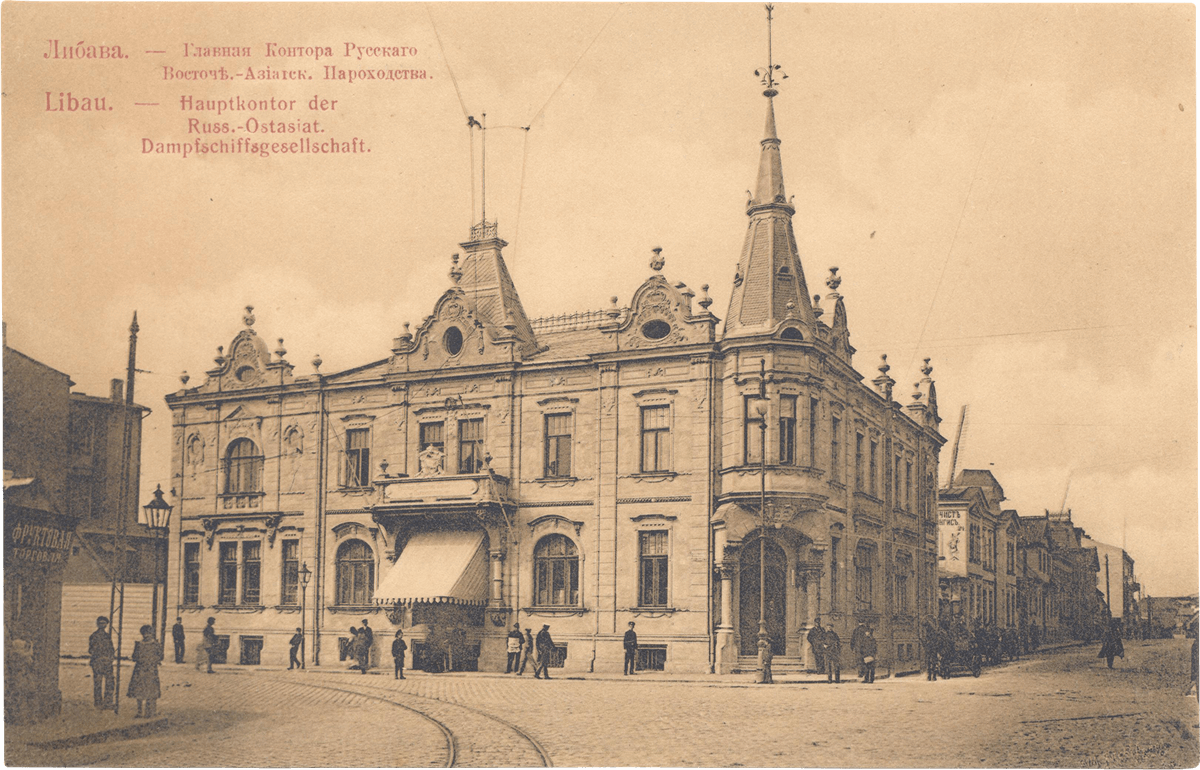 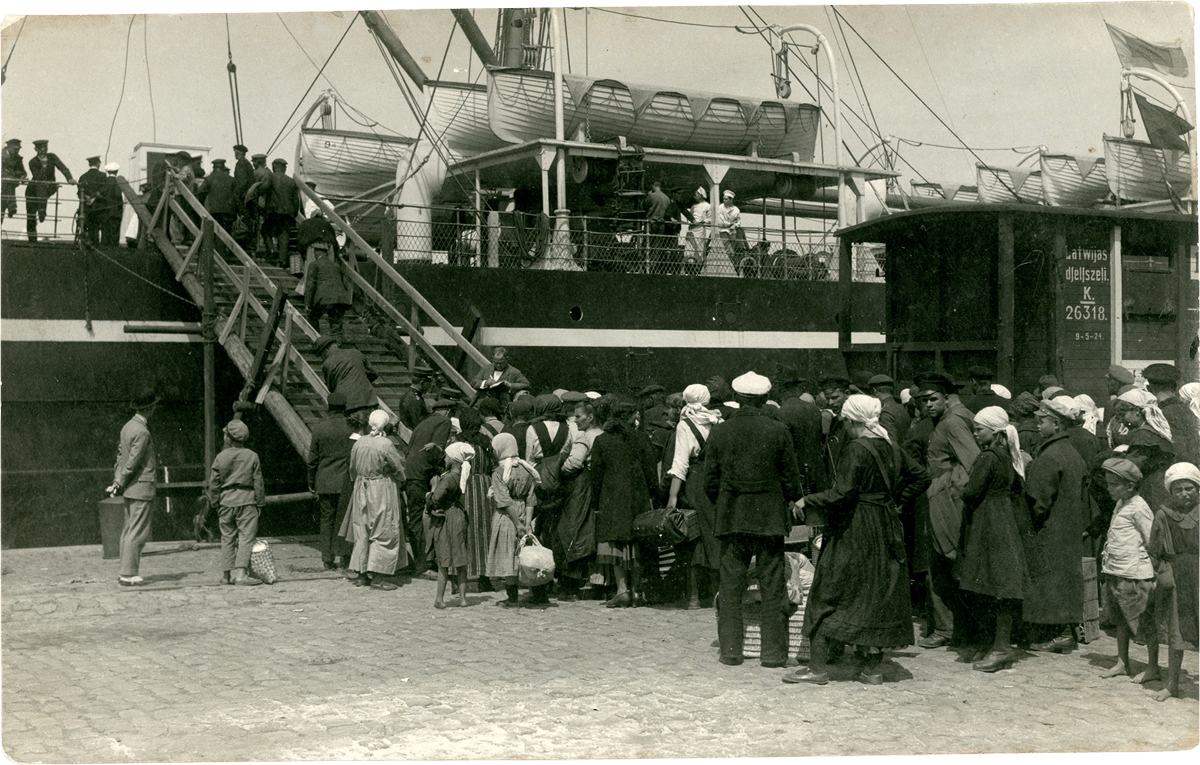 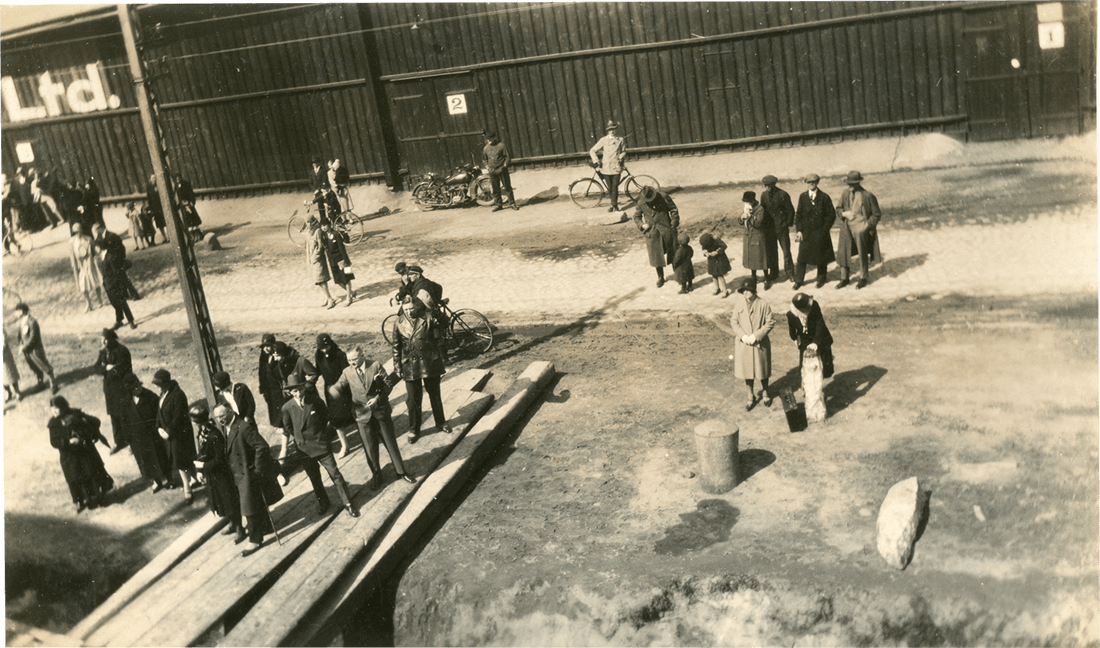 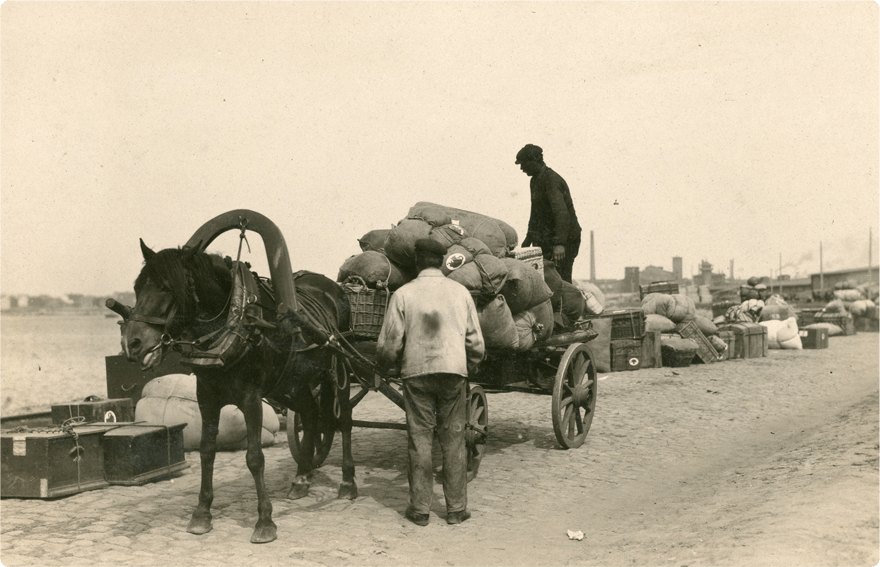 Year 1915
At the beginning of May, German troops started taking positions to occupy Liepaja. It was envisaged to surround the town and to perform the main attack from Grobina side. With the support of warships the small resistance was overcome, and Germans were in control of Liepaja already on 8 May. 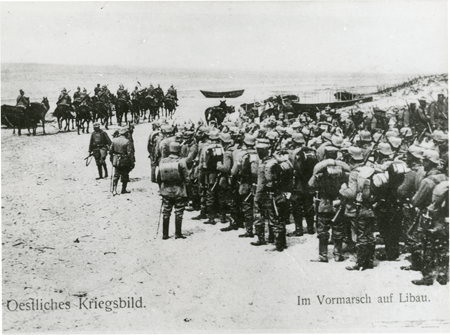 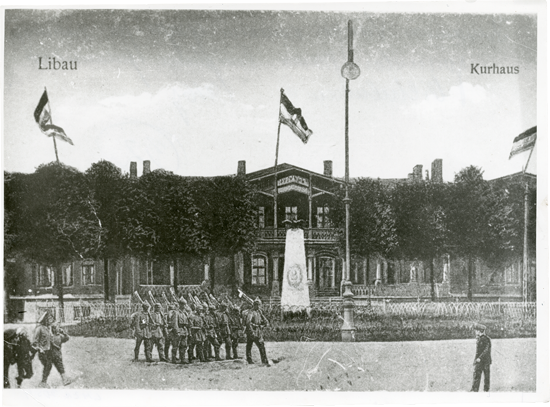 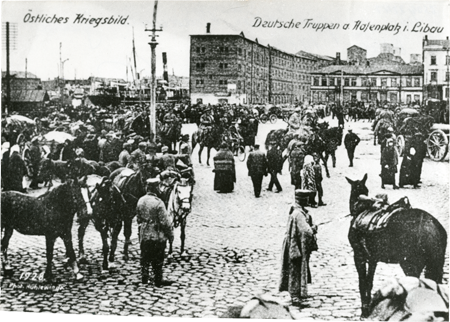 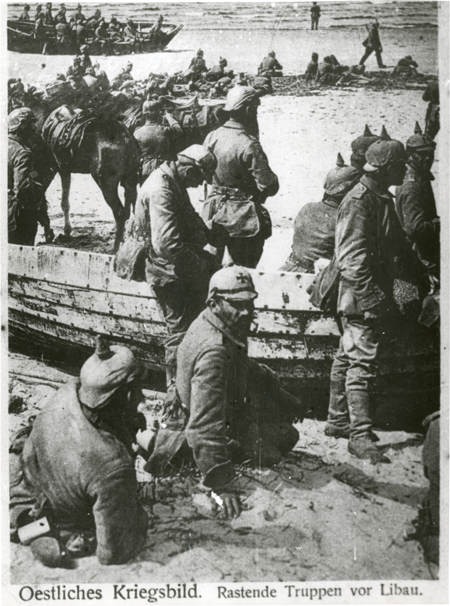 Year 1918
On 23 November for the first time since the beginning of World War I ship from a neutral country came into the port. During this complicated time not only it was difficult to sustain order within the port but also within the town.
Residents were suffering from lack of jobs but most importantly from lack of provisions. Local fishermen played an important role in providing for residents. Fishing during the war and also after the war was dangerous - only in 1918 it costed 12 fishermen their lives. Three of them died when their boat ran into a mine. Yet, in spite of the danger, about 800 seamen went fishing this year. 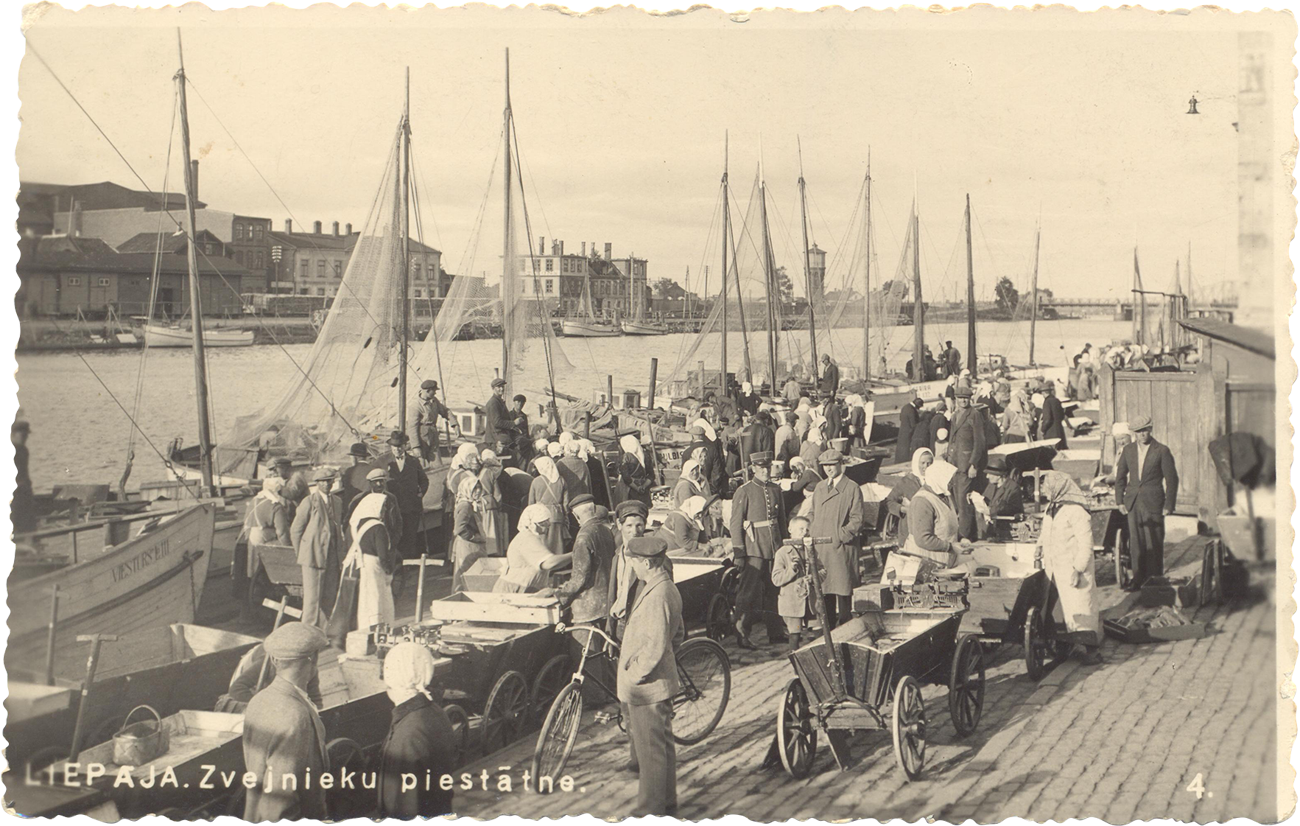 At work. Seamen’s berth after
the World War I. Foto © Liepaja museum
1920s
After the World War I during the First Independence of Latvia transit through Russia decreased dramatically therefore also decreased the turnover of ships and cargo at the port. The average cargo turnover up to 1929 was 240 000 tons per year reducing even more during the global economic crisis up to 1933.
Year 1921
For the first time in the new post-war situation a question of opening a free port was raised with a goal to further advance development of the port. At the beginning of the year Liepaja Stock Exchange Committee submitted a project to government that was passed down for approval to the Cabinet already in February. Place for the free port was chosen in between the Winter and the Northern ports where the cornerstone was laid in 1931; during this year first transit goods already came in. 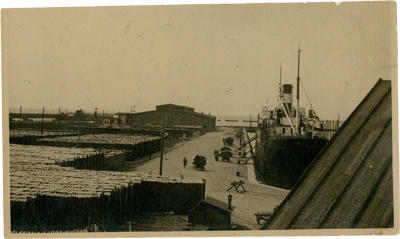 Steamship “Regent” – the first vessel to call the Free Port of Liepaja for loading timber. Foto © Liepaja museum
Year 1931
To promote economic activity in the Port of Liepaja it was granted the status of Free Port.
After 1934 when the rise of Latvian economy began it also improved the situation in the port of Liepaja. In money value:
Year 1939
Soviet cruiser Kirov came to Liepaja accompanied by destroyer squadron's ships Smetlivy and Stremitelniy. Cruiser upon entering the road fired 21 salvo, after that both Latvian anthem and Internationale were played. Warship Virsaitis (Chieftain) of Latvian Naval Forces was in the road and responded with salvos.
Since Latvia became part of the Soviet Union’s sphere of influence, Liepaja for the next two years became the furthest Soviet naval base in the West and in later years it became the most significant military traffic centre of the German troops. Due to this role of Liepaja it cost dearly both to the historic buildings of the town, as well as to its residents. 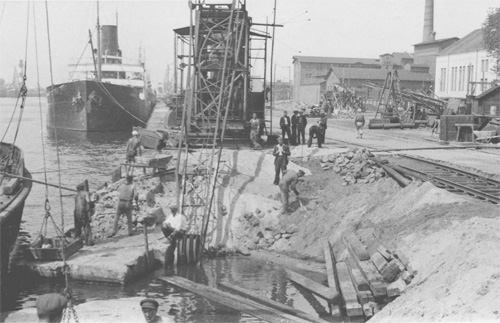 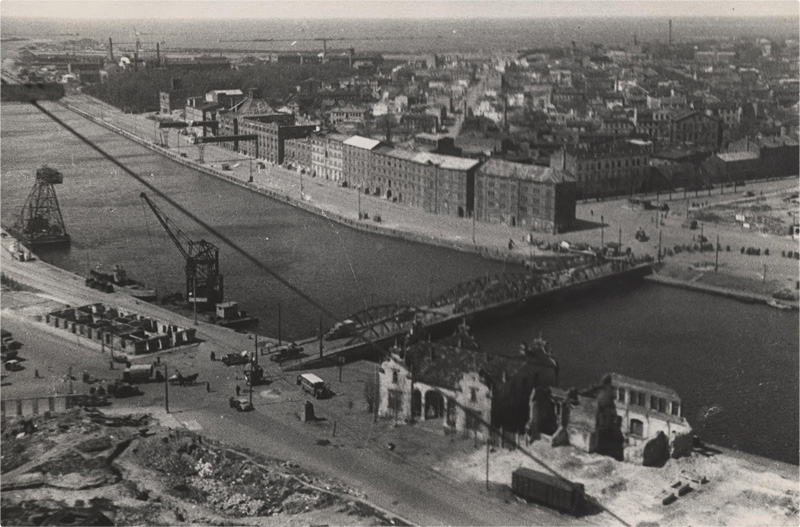 The war damage by the Liepaja Canal. Year 1945 . Foto © Liepaja museum
Year 1946
Right after the World War II operations at the port re-commenced since port has suffered relatively little during the World War II events. This year 207 ships came into the port and 434 600 tons of cargo were handled. 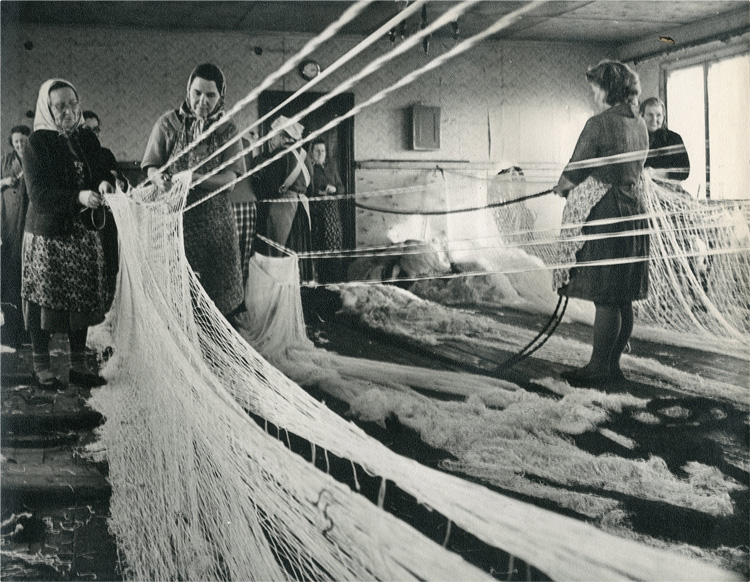 The established order lasted until 1959 when the MFS system was liquidated. It had become the factor impeding fishermen collective farm development since it was not beneficial for fishermen to rent the equipment. Thus as of 1959 fishermen collective farms were allowed to purchase fishing vessels and form their own fishing fleet, as well as the servicing and maintenance base. 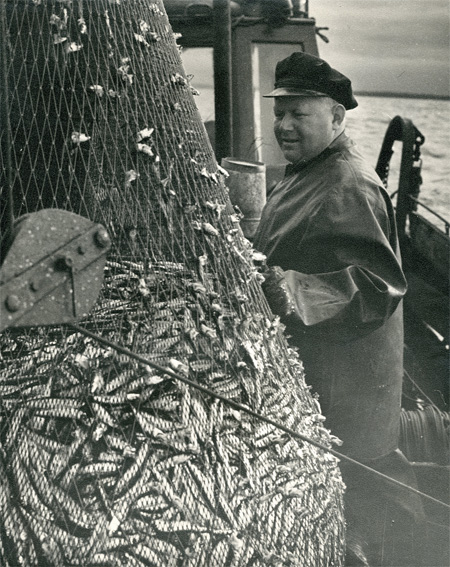 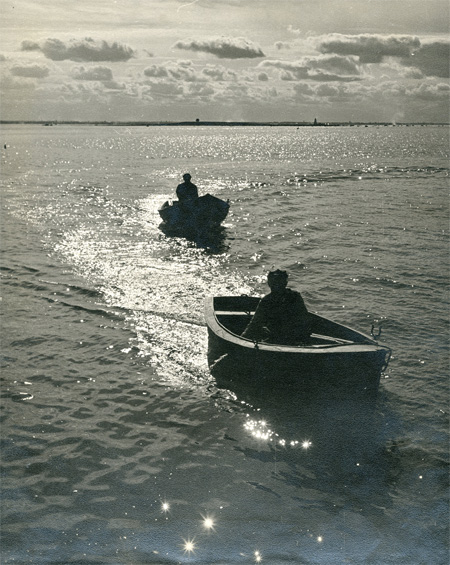 Evening idyll Foto © Liepaja museum
Year 1951
The Port of Liepaja as the commercial port was closed and it was only used as a military as well as a fishing port.
Year 1954
In April, for the first time after the World War II, 9 ships from Liepaja went herring fishing to the North Sea. In spite of the fact that equipment on these ships was not modern during their six month long voyage they managed to make unexpectedly large catch. This successful voyage proved the fishing potential of high seas expedition thus providing a safe foundation for further development. 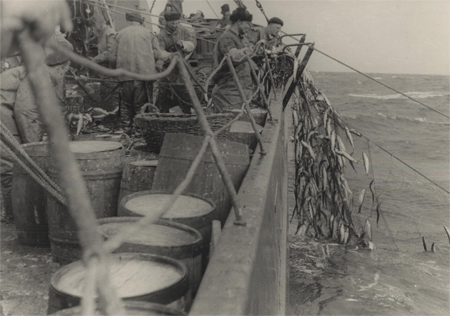 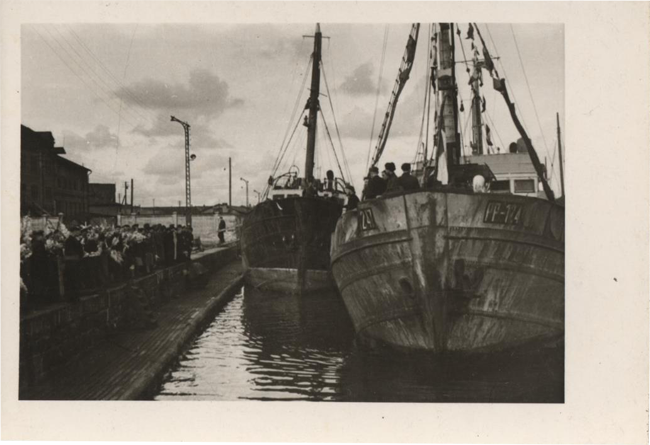 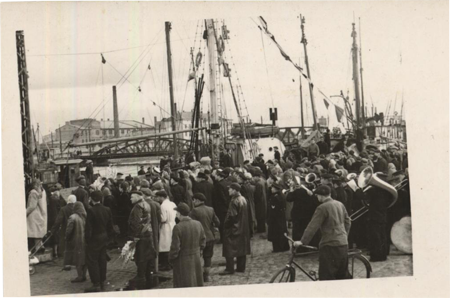 Foto © Liepaja museum
Year 1956
At the end of the year operations of commercial port in a small area of the port (in the Winter port and partially in the Free port) were renewed with the right to enter granted only to the Soviet ships.
Year 1964
As a result of the Order 67 from 18 February 1964 issued by the Chief Administration of the Western Basin Fishing Industry Zapriba (Western fish) of the USSR Ministry of Fishing Industry and the Order 85 from 24 October 1963 issued by the Chief Administration of the Western Basin Fishing Industry, the Liepaja Ocean Fishing Fleet Base (OZFLB) with its own trawler fleet was distinguished as an independent economic entity, which developed into a strong economic entity, managing and promoting high seas fishing.
Year 1966
The most active year in the port during the time when only Soviet ships were handled. This year 1 508 000 tons of cargo were handled. 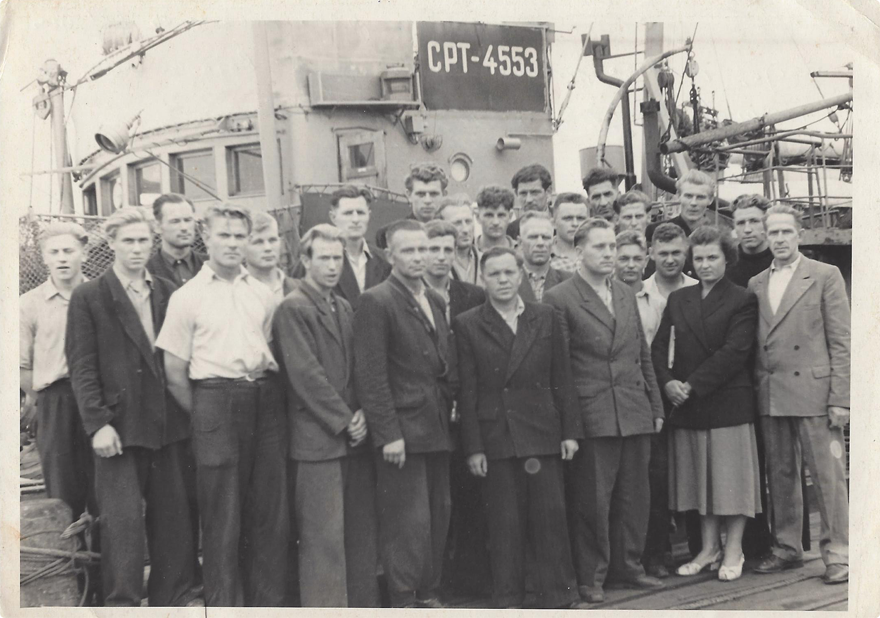 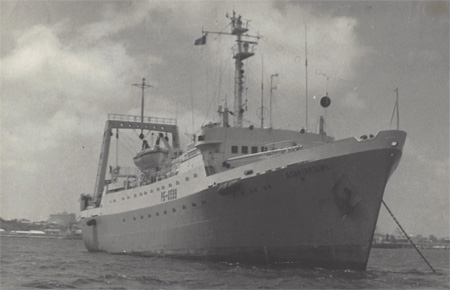 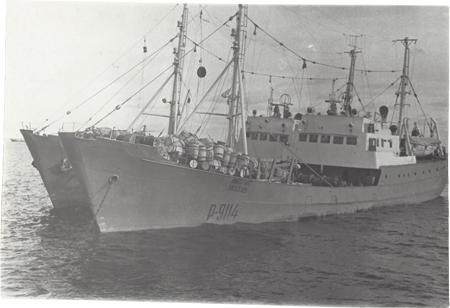 VZT type m/v «Viesturs» in the sea. Foto © Liepaja museum
Year 1967
Again commercial port was completely closed and handed over to the USSR Navy. Only a small part of Trade Channel was left for civil use where Liepaja Ocean Fishing Fleet Base and fishermen collective farm Boļševiks (later Kursa) operated.
Year 1978
Fishermen collective farm Boļševiks had become the biggest fishermen kolkhoz in the territory of Latvia. At this point the collective farm had expanded a lot - it employed 1500 workers and kolkhoz had also acquired both new processing and fishing equipment. 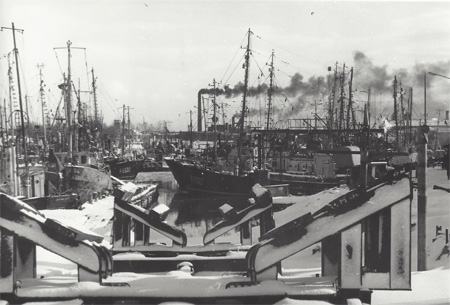 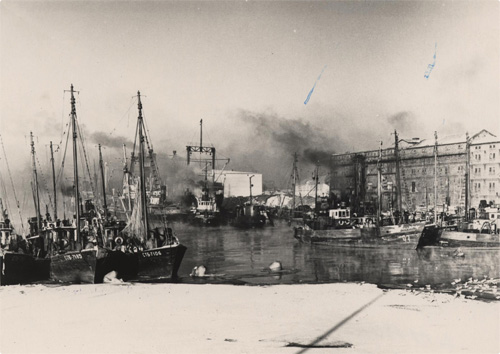 Fishing boat in the Port of Liepaja. Year 1962. Foto © Liepaja museum.
Year 1991
On 27 September, 1991, after regaining the national independence, the Board of the City of Liepaja adopted a resolution on the renewal of the status of a commercial port.
Year 1992
On 1 January, almost after a 50 year break, the first foreign merchant ship Hainovka entered the renewedPort of Liepaja flying under Polish flag; it took the cake cargo from Liepaja Oil Extraction Plant to Denmark thus opening a new page in the development history of the Port of Liepaja.
63
ships
100 000
tons of cargo were handled
Year 1994
On 31 August the Russian Navy base ceased its operations in the Port of Liepaja. Berths, territory covering, roads and railways after their final handing over to the Port of Liepaja were in a critical technical condition. Port aquatorium was littered with sunken and half-sunken ships and submarines left behind by the Russian Navy. Very intense work was started to fix the port infrastructure and communications.
To promote berth repairs, reconstruction and construction of the infrastructure it was decided to rent some port berths or groups of berths to companies in order for them to start port-related entrepreneurship fixing the berths and developing the relevant infrastructure at their own expense; rent was collected only after companies expenses invested into the port infrastructure were recovered. 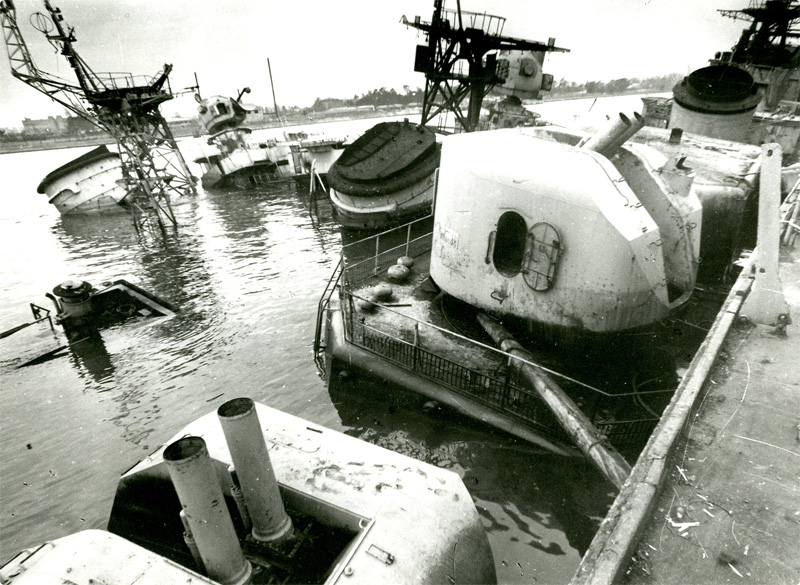 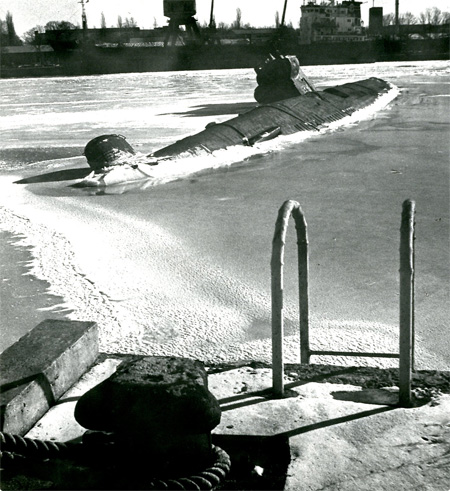 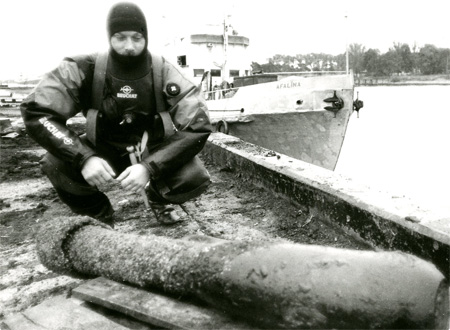